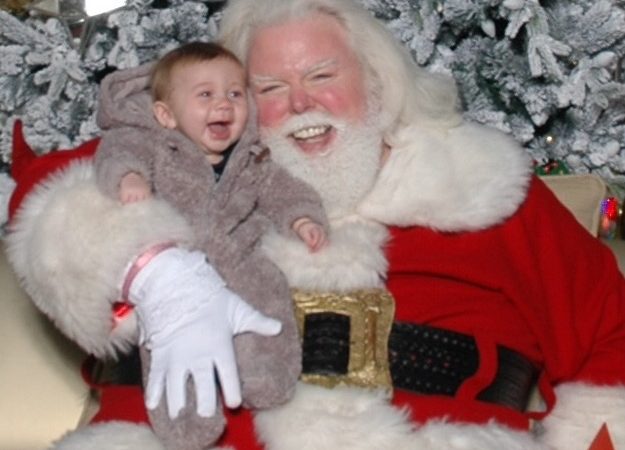 On embossed letterhead, lengthy emails, tweets attached to little blue birds. From the very youngest to the very oldest amongst us. Messages of hope on their way to a magical place in the North Pole… where a global army of fast working elves are on double overtime finishing the final details of gifts for a planet in need of hope, love and inspiration. Whether he’s a jolly big dude with a white beard in a red plush suit with black boots… or he’s simply an emotional concept for you – we all believe in Santa. And I won’t hear it any differently!

You’ve got this y’all – Santa, you can do this!

My son is so excited.

At 3 ½ he doesn’t entirely get the measure of a day… and how many days are on the calendar before the 25th. He just knows that there are boxes and packages and metal tins under our Christmas tree waiting to be filled with gifts. And the gifts won’t arrive until some pre-ordained moment on the night of the 24th when we’ll hear sleigh bells and hooves lead by one little dude with a bright red nose on our raised seem metal roof. After visiting our home we’ll hear a bellowing ‘ Ho, Ho, Ho ‘ on a whisk of a breeze into a chilly night under a sky flooded with stars over a landscape blanketed in snow.

Exactly as it should be for every child. And every child that lives within us.

For a little boy with a huge imagination. A big heart. An infectious laugh. An energy level that makes the Energizer bunny look like a lazy slug. … Its not the toys, no. It’s… the magic, that he and every other child in our world deserves. We adults could use a good measure of this magic too!

With each passing year, I find it more difficult to make out a Christmas list. Through hard work, perseverance, and tenacity… I have a blessed life when it comes to ‘ things ‘ . We have plenty of things. There is literally no ‘ need ‘ . I can quote my sister-in-law when she states ‘ you suck to shop for! What do you get someone who has everything? ‘ … and we laugh. I don’t know about everything. But we have everything we need and then some. We’re good.

So my thoughts turn to the deep end of the spectrum, into the philosophic, the esoteric, the principaled… The lofty things I find hard to ask Santa for: solve world hunger; cure global poverty; hold every country on the globe – our’s first among them – accountable for their adherence to the Paris accord on climate change; make sure the polar bears survive… things we all need. I need. I struggle to imagine how to make them happen. I do my small part… give locally, create employment opportunities, remember to properly sort my garbage and recyclables. … I don’t know what to do for the bears… breaks my heart. And yet, at the end of the day, these BIG THINGS seem out of reach.

What seems in reach is a future reality that sends me into a tailspin every time I go down the dangerous path of sorting it out. An issue we have failed at – literally Grade F- – miserably. Miserably. When I say ‘ we ‘ I mean every adult in this country. Me. You. All of us. We have FAILED.

Almost 250 years ago, a group of brave refugees – men AND women – came together on the Eastern shores of our continent with the intention to create a new country. A country with a future defined and born from all of their greatest aspirations without any of their greatest grievances. Facing a foe with the most powerful armed services in the world at the time, the greatest concern these folks had was survival. We can dream, and build, and fight… but if we can’t survive, how will we forge ahead with our bold vision of a new democracy. These folks, smartly, realized that they too needed to be armed. That when red coats came knocking on the door in the dead of night, armed with muskets and rifles, if they did not have these same armaments to forcefully resist the tyranny, then the dream of what would become these Unites States of America, would be lost. I’m skating the surface here quickly, but born from these very real issues of the day, into the DNA of our American fabric, was the 2nd Amendment to the Constitution of the United States. The right to bear arms. More accurately, ‘A well regulated Militia, being necessary to the security of a free State, the right of the people to keep and bear Arms, shall not be infringed. ‘

I support the 2nd Amendment. I have no issues with it at all. From its original writing to the world we live in today, its veracity and applicability, I believe, still have merit.

However. The world our forefathers lived in, and the world they created, some 250 years ago looked nothing like the world we live in today. I do not for one moment believe that these folks believed it would be conceivable, or acceptable, that our children – from PreK through 12th grade – would be mandated to rehearse ‘ active shooter drills ‘ in the sanctified space of their schools. I don’t. There isn’t any one who can argue to convince me differently. No… Washington and Jefferson and Adams didn’t anticipate individuals with questionable or verifiable mental health issues, socio/cultural extreme counter norms, or terrorist based tribal affiliations picking up weapons designed for military use with the sole purpose of killing human beings, to gun down and kill other fellow citizens on our native and sovereign soil for no legal or morally correct purpose. They didn’t anticipate it. They surely never imagined that our very children… ages 3 to 18, would ever become intentional targets of domestic terrorism by their fellow statesmen.

Our founding fathers also didn’t see so many other things becoming reality either. The automobile. The monolithic growth and impact of the tobacco industry. The waste and pollutants created by the lightbulb industry. AIDS. And so many other issues. There is no way they could have. Sure – they definitely had their own issues of their day. Like the issues of our day, none of these other issues rose to the level of necessary inclusion in our country’s founding legal documents. I want to believe that their problems not outlined in the Constitution were resolved through common sense, trial, error. Like ours have been with seat belts, non-smoking laws, CFL lightbulbs, child seats, condoms. As we live, we learn. We adjust and pivot. Rethink and rewrite our laws.

In my role as father, I dream of a day when the idea of an ‘ active shooter drill ‘ was something your parents had to do… akin to war rationing, or driving around in a station wagon with no seatbelts while your parents smoked their Marlboro’s in the front seat with the windows rolled up.

Enough. Its just enough. It has to stop. We adults in the room have a God mandated moral obligation to our children in the room to not fail at this anymore.

So Santa… my list for Christmas this year has only one item on it.

Please bring that for my son.

[ …carrots for the reindeer again this year? And red sprinkled chocolate chip cookies with chocolate milk for you? ]